A week ago, Apple announced upgrades to its MacBook Pro line that brings the processing power of the 15-inch version up to a 6-core 8th generation Intel CPU. The new CPU is supposed to bring a 70% performance increase, but reviews are finding that the laptop runs too hot, throttling the real-world CPU performance.

In the 6-minute video above, popular tech reviewer Dave Lee states that even though the new MacBook Pro contains a beast of a CPU, the laptop’s physical design presents a major problem.

“The i9 in particular is a very powerful CPU — when it comes to multi-core applications, this thing’s a beast,” Lee says. “The problem though is that [the new MacBook’s] chassis […] cannot cool the i9 properly.” 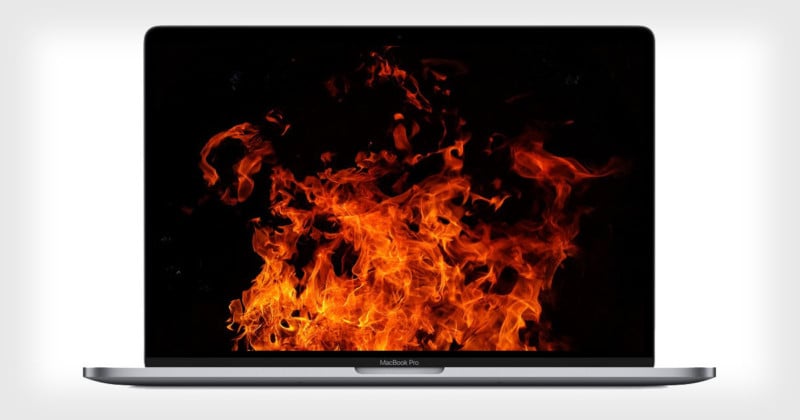 Lee tested the MacBook Pro with Adobe Premiere, and after a few seconds of rendering, very serious throttling rears its ugly head after just a few seconds.

To confirm that it is indeed cooling that’s causing issues, Lee tested the same render with the MacBook Pro in a freezer. Performance instantly improved.

AppleInsider ran its own tests and confirmed that there’s serious thermal throttling:

“Apple’s new powerhouse six-core i9 CPU in the 2018 15″ MacBook Pro has some pretty massive overheating issues,” AppleInsider writes. “Under load, the CPU speed clocks down to MUCH lower than the base 2.9GHz, even matching the average clock speeds of the base 15″ MacBook Pro’s i7 CPU.”

While thermal throttling isn’t anything new in MacBooks, the fact that you can upgrade this latest pro-grade MacBook Pro to 32 gigs of RAM and 4 terabytes of SSD storage means that creative professionals will be dropping serious dough on machines that will likely run slower than they expect (if this issue is indeed present in all units).

Visual Self Harm: Images I Don’t Want to See

How to watch Game of Thrones season 8, episode 5 stream online from anywhere

You should wait until 2020 to buy a cheaper OLED

Swirly Bokeh for Cheap: Shooting with a $40 Vintage Soviet Lens

Facebook And Cambridge Analytica, Explained: Should You Join The #DeleteFacebook Movement?

What is the total cost of an HTC Vive?