Hangouts Meet by Google is a video conferencing service that aims to reduce the issues that are generally faced by groups while organising a video meeting. “That’s why we’ve built Hangouts Meet to have a light, fast interface and smart participant management,” the search giant said in its official blog post. With Hangouts Meet, users can start a video conference meeting by just sharing a link instead of going through tedious tasks like creating an account, installing a plugin, or downloading something else, the company says. Notably, Hangouts Meet is also available as a web client at https://meet.google.com/.

While G Suite Basic and Business users can start video meetings with up to 25 people, the G Suite Enterprise users can organise these meetings with up to 30 people. As the app is closely integrated with other G Suite apps, the information required about any meeting can be pulled directly from the Calendar as well. “For our G Suite Enterprise customers, each meeting comes with a dedicated dial-in phone number, so team members on the road can feel connected and productive in meetings despite Wi-Fi or data issues,” Google said. 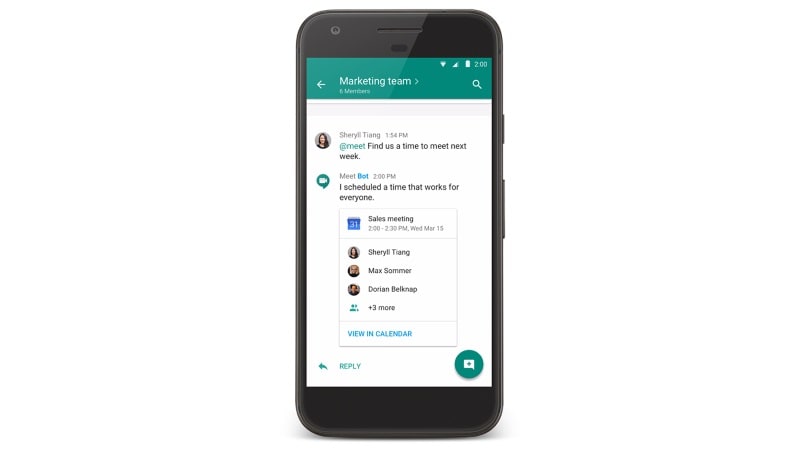 “Chat’s deep integration with G Suite means shared content from Drive and Docs, or photos and videos can be viewed directly in conversations. And powerful, filterable search in Chat makes it easy to find all your content dating back to the start of the project,” Google said in its post.

Hangouts Chat comes with support for bots, including @meet bot that makes use of machine learning to automatically schedule meetings for the team, and integration with third-party applications to provide more functionality to the users. Google says that it has been working with Asana, Box, Prosperworks, and Zendesk for building up the platform.

Separately, Google has also updated its Allo chat application with support for Android Auto to allow for hands-free messaging while on-the-go. While previously, the notifications from the app used to disappear behind the interface for Android Auto, now you can use your voice to reply to messages, as pointed out in a report by 9To5Google. The update also brings bug fixes and performance improvements, and sees the rollout of animated emojis previous announced by the search giant.

Feb fitness deal: Save AU$131 on a Fitbit Charge 3

Apple’s Sidecar just really *gets* me, you know?

Apple improved the 2019 MacBook Pro keyboards after all, iFixit uncovers

Nintendowned: Amazon sells out of the NES Classic Edition in (null) seconds

IndyCar is ready to introduce 900-horsepower engines by 2021

Sony announces the PlayStation Classic, its own mini retro console

Best CDN providers of 2019 to speed up any website

The Significance of a Personal Project

Microsoft finally kills off the Kinect, but the tech will live on in other devices

Low-mileage Lamborghini Miura, once owned by Saudi royals, up for sale