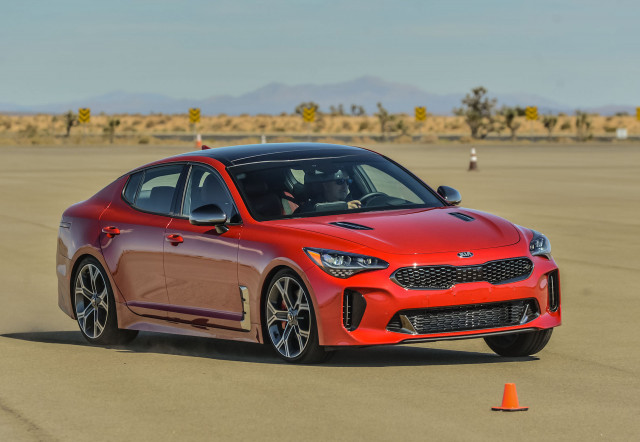 Along its journey from builder of cheap but reliable transportation to budding luxury market player, Hyundai-Kia’s strategy has been “if you can’t beat them, join ‘em.” Or more appropriately, have them join you.

When its cars looked like poor imitations of melting Jaguars, Hyundai-Kia hired Audi designer Peter Schreyer to give its sheet metal some genuine style. The result was the 2010 Kia Optima, a car that injected verve into the usually staid mid-size sedan segment.

But that didn’t change the company’s inability to tune a suspension. Or maybe it didn’t have the right parts to make a chassis work. Enter Albert Biermann in December 2014. As the former head of BMW M engineering, Biermann was tasked with making Hyundais, Kias, and the new high-end Genesis models sportier. The first car he developed from soup to nuts? The Kia Stinger.

Biermann joined the company when the design for the Stinger was already underway, and Schreyer and his team had penned the attractive fastback lines inspired by cars like the 1970s Maserati Ghibli. “When I joined Kia, I said these cars need to drive as good as they look,” Biermann said in a company-produced video for the Stinger. The former M boss was happy to find that Kia had good parts to use. They just needed to be put together and tuned correctly.

And just what are those parts?

The GT model is best defined by its engine. Under its sculpted hood sits a twin-turbocharged 3.3-liter V-6 that develops 365 horsepower and 376 pound-feet of torque. It is mated to an 8-speed automatic transmission with steering wheel shift paddles. The base Stinger gets a turbocharged 2.0-liter 4-cylinder making 255 hp and 260 lb-ft of torque.

The body for every Stinger is comprised of 55 percent advanced high-strength steel, but it uses no light-weight materials like aluminum or carbon fiber. Hyundai is a steel company after all, so Hyundai Group vehicles will likely never use aluminum. Extensive use of structural adhesives helps stiffen the Stinger’s body, as does a special structural ring around the rear hatch opening.

The front suspension relies on aluminum for the brace between the MacPherson struts. The rear end gets a five-link independent suspension mounted to a stiffened rear subframe. Electronically adjustable dampers, a Kia first, are used at all four corners for the Stinger GT, while 4-cylinder Stingers get static dampers. The brakes are Brembos, with 13.8-inch discs and four-piston fixed calipers up front and 13.4-inch discs and two-piston calipers at the rear. It all rides on a staggered set of 19-inch Michelin Pilot Sport 4 tires, 225/40s up front and 255/35s out back.

Kia offers the Stinger GT with rear-wheel drive or a rear-biased all-wheel-drive system that uses an electronically controlled clutch to shift up to 50 percent of the power to the front wheels. Put the Drive Mode Selector into Sport and up to 80 percent of the power can go to the rear. Rear-drive models are available with a mechanical limited-slip differential, while the AWD versions have a brake-based torque vectoring system that clamps down on the inside wheels to send power to the outside rear wheels in a turn.

COVID-19 impact: Autonomous car market likely to decline by 3% in 2020

Should Photography Be Relaxing?

Porsche Taycan electrifies at the 'Ring with 7:42 lap time

Microsoft Surface Book 2 Tipped to Ditch 2-in-1 Design, to Launch in March or April

PSA: Fotodiox’s Nikon to Sony Adapter Could Kill Your Camera

Report: Ford Explorer ST in the works for next generation of popular SUV

Nice phone, Essential, but why is there a hole in the screen?

Here are the first videos of the Apple Watch Series 4, iPhone XS and iPhone XR

Canon Shares Composite Photo Made with a Fujifilm Camera Without Credit

Next iPhone could be available in grey, white, blue, red and orange

Nearly half of all UK payments are contactless

Despite challenges, quantum computing can break combination of blockchain and AI